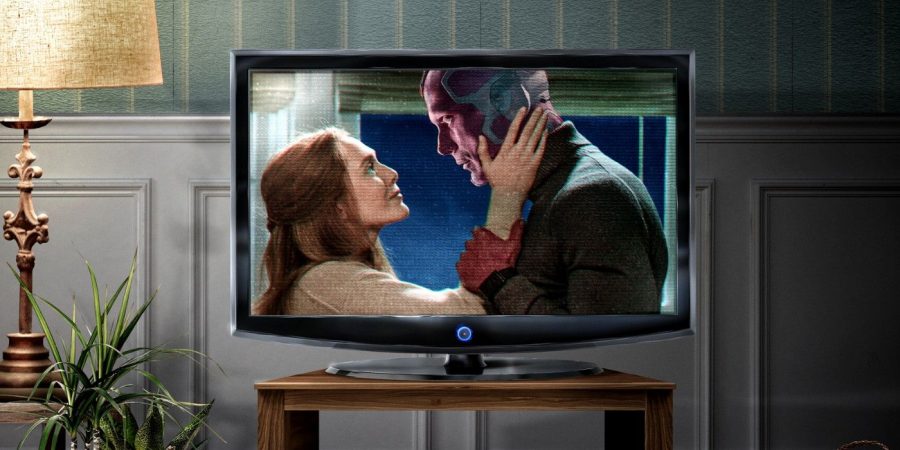 Wanda and Vision are two very well-known superheroes from the marvel universe. Recently, as you may have heard; Wanda and Vision have been trending the past few weeks thanks to their brand new tv show on Disney plus, starring Elizabeth Olsen and Paul Bettany from the previous Avengers films. Although their duo in the MCU films may have come to an end, their popularity has risen as they now have their spin-off series. According to the time I’m writing this, there have been 6 episodes out and I will explain what the spin-off series mainly about from those first few episodes.

The first two episodes have been comedic/slice of life type of episodes taking place in the 1950s/1960s with black and white color. It was mainly about Wanda and vision trying to fit in with the society they were put into while keeping their superpowers secret.

Now we reach episode three. In episode three we are introduced to the series with a change of color. The time now seems to be somewhere in the late 60s/possibly early 70s, and it is shown that Wanda is magically pregnant.

By the later end of the episode, Wanda gives birth to two born twins. One of the neighbors helps Wanda deliver the baby since vision is gone trying to get a doctor. The neighbor who helped Wanda with the pregnancy mentions Ultron which leads Wanda to be suspicious. Wanda ends up sending her neighbor to the middle of nowhere.

Episode 4 shows us that Wanda and Vision are stuck in some sitcom universe. At the beginning of the episode, we are introduced to citizens being erased just like it was shown in infinity war. One of the citizens who survived the accident was shown touching a clear screen and getting sent inside the 50s/60s sitcom. That citizen was Wanda’s neighbor who Wanda specifically attacked in the previous episode.

The rest of the episode is focused mainly on the task force trying to figure out why Wanda and Vision were stuck in a 50/60s sitcom.

Episode 5 focuses on the twins growing up, alongside the timeline moving from the 60s/70s to the 80s/90s. We are also introduced to quicksilver who appeared in the Age of Ultron movie and died during that film.

Episode 6 doesn’t show anything that important until the end. The main focus is quicksilver fitting in as a family with Wanda, vision, and the children. They eventually go to some Halloween festivals and have a great time. By the later end of the episode, Vision encounters a clear screen just like episode 3, and as he encounters it he decides to pass through it. Vision ends up entering a different dimension, well at least what it seems to be, and passing through the screen causes him to be near death.

After watching the 6 episodes that were released; I think this Wanda and Vision come from a different universe and not the same MCU universe we are familiar with. I think this universe was created during Endgame when they were going back in time to gather the stones. During the process of going back in time to gather the stones, I think it caused a butterfly effect and created a parallel universe. I also think since the sitcom timeline is going by fast that they will eventually reach the modern time period quickly and return out of the sitcom to their original universe. Either way, there are so many ways I think this series may turn out to the point that I can’t name them all in just one story.